Yes folks, I have been studying for my first Microsoft exam: Microsoft Windows Server 2012 70-410 with R2 updates! The first thing in the book is installing Windows Server. One of the useful features in Server 2012, Microsoft claim, is the ease in which you can move between the Core (the new default) and the GUI options.

Since there’s no substitute for trying it out, I installed server core and have spent many hours since using the published commands to try and upgrade it to a GUI, so far without success. Talk about falling at the first hurdle. This book is 400 pages and this is pretty much the first question in the test. Great.

Along the way I have learnt some stuff: how to remotely manage the server (in a workgroup), the key part of which is running

from a Windows 8 client with RSAT installed and having set the administrator password on the server and allowed remote management via sconfig.

The published way to perform the GUI install is using the powershell command install-windowsfeature. My results are as follows: 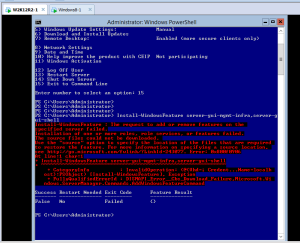 A Google of that revealed several suggestions, the majority of which suggest using the -source switch and adding GPOs or editing the registry to change the behaviour of WSUS, none of which worked.

There are various options of syntax described for the -source option but I have tried many and various and none of them worked for me.

The latest, and most promising blog was to be found at http://blogs.technet.com/b/askds/archive/2012/09/20/windows-server-2012-shell-game.aspx

Which suggested specifying a wim file as the source using the following command:

Great, I thought! This time it would be right, it would work and no one would have to get nailed to anything. Having invoked this command and let it think for 5 minutes (long past when it had failed before) I get:

Oh well, back to the virtual drawing board.

I would like to expand on my previous post. Here are three facts, as I see them.

Mail has a vast untapped potential in the social media scene. Well that may sound odd since mail is the core networking app but what I mean is that is very restrictive in the way it was designed. One person, one mailbox. That is basically the premise of mail. The protocols are all designed around that fundamental design parameter. Back when mail was designed, social media was four decades in the future and one user could, via their credentials connect to “their” mailbox. Other technologies were adopted to give rise to usenet newsgroups. These however were at the other, public, end of the spectrum and are considered obsolete, according to Wikipedia.

What I’m thinking of is something in between the individual and everybody. A group, be it a family, a club or some other organisation with enough common trust that a single set of mail is shared by them all.

It sounds pretty simple but I suspect in reality, it is a massively difficult problem in message data synchronisation and retention.

Pity this post has been sitting in draft for a month!