My first test was pretty successful! I had exported from my virtualcenter my old Portege 7200 to an ovf file on my current laptop with VMware workstation. This I managed to import and run. Cool! The only fly in the ointment being the bug in ovftool which gives an error when parsing the ovf file. I got round this by upgrading to the latest version of ovftool and running it manually to convert the ovf to a vmx file and then importing that.

The next challenge is, of course to move the VM I used today back to my VC, to make it truly portable. Changing formats multiple times is not practical so I need to see what I can do with a USB stick, which harps back to my datastore on a USB stick search of last year (still not supported by VMware). Should still be able to use one to store the VM files though.

First of all, here’s a scan of the programme to help me remember what I went to: 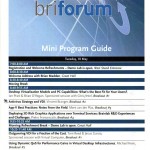 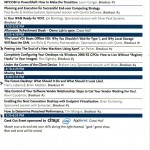 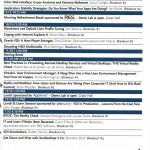 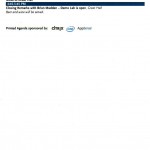 The most thought-provoking session being Brian’s Myths and Realities (consumerisation of IT) which led on from his and Harry Labana’s talk the day before and the morning roundtable. I realised that a lot of the problems could be solved by my USB idea (see below).

I am currently working on a cloud project for a client. For me, the goal of cloud computing is to make IT another utility. You go to the office, fill the kettle from the tap, plug the kettle into the power socket and plug your USB sticks into the hypervisor which the IT department supplies along with a nice big screen and keyboard.

What you have on your USB sticks is virtual machine which contains your desktop: O/S, apps and even data (maybe another USB stick for that). The hypervisor loads and runs your VM, which is in a standard format and you log in to your familiar desktop and share your data using an internet connection, gmail and dropbox. Don’t forget, I’m assuming that in a few years time a pendrive will contain terabytes, but even today you could carry a pretty massive hard drive easily.

I already have an old Toshiba laptop running XP which had 128M and I P2V’d when I bought a new machine (which is also old now). I’m going to export that to a USB stick and do an experiment soonish to see how portable it is (using VMware products for starters).

Finally thanks to Jim Moyle (who gave a fascinating, nay shocking talk on Windows IOPs) and for inviting me to “Ye Olde Cheddar Cheese” in Fleet Street along with some of the other presenters and Techtarget folks where we ended up in the basement (surprise surprise) and from where I parted company very late as they headed off to another venue.

I trust everyone made their flights and I look forward to another meet-up.

Extra early start for me to get from the South East of London to Stamford Bridge for 8am but luckily made perfect connections with all the trains so got there in plenty of time.

I have to say first that the venue is not the best. Certainly not a patch on the Nemo centre in Amsterdam. This is largely due to the fact that the “Great Hall” is probably the most depressing space I have ever been in. It’s a long thin room and it’s ALL BLACK. I had to go out for half an hour at lunchtime just to get some daylight. Apart from that the rooms are “ok” but there is no lab either and consequently no computers to use. Old fashioned perhaps.

I was slightly disappointed by the breakouts. Ian Parker’s talk on Xperf and Ron Oglesby’s talk on VDI were the best for me but the others seemed lacking. Reflecting the state of the desktop industry, much of the breakout material, particularly those involving Brian, have been on crystal ball gazing at a point in time where Windows 7 is being rolled out and VDI is not being accepted as the ultimate solution for desktops. Of course, VDI isn’t the ultimate solution for desktops as there is a growing realisation that server virtualisation and desktop VDI are very different things.

Being a cloud guy with a server background I was disappointed that cloud didn’t get more of a mention. In many ways it is “implied” by the realisation that apps are evolving in the environment of the cloud and the desktop will ultimately become a human interface device for accessing new apps as traditional operating systems and brick based applications are replaced over time. Traditional operating systems and apps developed for them will be left as niche products in an increasingly complex world where more and more choice of apps is available.

Key is the fact that younger users have grown up with IT and they will not be restricted by the whims of old-school IT management. In the end I don’t think this is a battle that IT can win. On the one hand users have enough know-how to get and use the apps they want and on the other, business managers want to cut costs and take a more utility approach to IT. IAAS and PAAS. Implementation of public and private clouds will be the tipping point.

And what are Microsoft going to do with Skype?

If you are going and would like more information about RedPixie, our products, consultancy, the cloud or meet me for a chat, drop me an email at duncan.baillie@redpixie.com or duncan@p2vpro.com.