I  managed to uninstall the old version of vmware using the recommended command! First I removed the /etc/init.d/vmware file which had the desired effect of stopping the kernel modules being loaded and the processes from being started.

After a reboot I ran the VMware-Workstation-Full-8.0.6-1035888.x86_64.bundle which was running along swimmingly until I got a kernel panic. 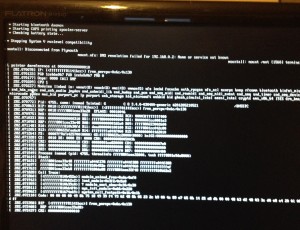 So I can see the fun will continue trying to clean up this mess.

I thought it was time to try a new theme as the original one was looking a bit tired but I am not sure if I like it yet (okay I undid it). We are experimenting with this in the office so it was a good time to do it.

An update on my laptop P2V is that I managed to get my virtual copy working, thanks to tips in the following URL: http://communities.vmware.com/message/2030146.

I think the only setting I changed was the ATAPI one, all the others being set as described already but I will check again more carefully.

I am impressed with the 1TB Freecom XXS drive I bought. I have used it to backup my QNAP prior to a firmware upgrade and I am now using it for a bunch of VMware workstation virtual machines.

I am not impressed with the interoperability of VMware products. I exported a guest from vsphere into an ovf package but you can’t import this into VMware workstation! I’ve had this problem before and there are plenty fixes on the web. Still very annoying though.

As it happens, I realise that I created this ovf by exporting a hardware version 8 machine which I strongly suspect will not load into VMware workstation 7. Have to wait for an upgrade.

I’m a big fan of USB flash drives. You can buy a 256G flash drive today which is remarkable given that until 2005 most personal computers were still shipping with 2.88MB floppy drives. The capacity will certainly grow and the cost will certainly come down. It is not too hard to imagine a flash device weighing a couple of grams with 1TB of capacity in the not-too-distant future.

The question is, what can we use them for? What existing IT problems can we solve with these devices and what novel applications may spring up?

A feature of modern life is almost everyone carries with them a mobile phone. In many cases this is a smartphone so it is not a stretch to say everyone carries a few Gig around with them. To most people that just means they can play better games or store more music. But there seems to be an opportunity there to combine mobility and massive storage to solve more general IT problems.

As I work for RedPixie, a technology company specialising in virtualisation, I have ample opportunity to get involved with leading edge IT. In an increasingly “virtual” and “cloudy” world, particularly with reference to remote working, moving data around quickly is key, particularly “personal” data. In a Windows world that would be referred to as the “profile”. I see that as the chunk of config which makes your computer usage personal. An organisation may well have 2000 identical computers for people to use in terms of hardware and operating system (even apps). But you can guarantee that after a very short usage period , no two computers will be the same just because of the way an individual configures settings to suit themselves.

This whole problem comes under the banner of “profile management” and it’s pretty big business with several products in the marketplace targetted at storing, moving, applying and changing profiles.

I have a theory that a portable mass storage device seems like just the ticket for storing large amounts of personal data. I posed this question to my learned colleagues over a beer one evening. I was told it was a question that only a Unix person would raise :-). The key point is that as much as possible needs to be as close as possible i.e. compute, data and profile. If your compute and data is on the other side of the Atlantic it doesn’t help you that you carry your profile with you, you still have a latency/bandwidth problem.

But, my point is, with a 1TB flash drive you take EVERYTHING with you: O/S, apps, data and profile. All you use at the remote location is the compute hardware and human interface devices. This strategy is made easier by virtualisation where the O/S you carry can be a VM running on a corporate virtual platform.

What do you do, I said after a couple of beers, if your base is on Mars? The maximum latency there is 20mins. You have to take it with you. Much hilarity ensued but that’s another story.

In this instance “Revolution” in America Square where some of the old BGI Unix team got together while they were in town from San Francisco and Singapore. Small world indeed.

“Fair fa’ your honest, sonsie face”, as the first line to Burns’ “Address to a Haggis” goes. I mention it because I have just given my annual addressing the haggis at the Friends of Heath House (school) meeting. And in case you haven’t guessed, this post has nothing to do with IT. At least, I haven’t thought of an IT angle for Burns night yet.

(As I mentioned before, I spend all my working day living an breathing cloud, which is great, but working under conditions of client and employer confidentiality means I cannot yet blog about all the good stuff RedPixie are doing.)

So I am taking another blog as my inspiration, that of Julie Kertesz who I/we met at a Christmas dinner party at our house (school connection again). I try to read her (daily) blog on the train in the morning after City AM. She writes about life in general, and is a great example of the blogging medium.

This is a great way to use an iPhone, even if the connection is a bit flakey on the train. Unfortunately, this gives me less time for my other past-time, reading (particularly sci-fi). I am eager to finish off “The Seige of Wonder” my Mark Geston, an author I stumbled upon completely by accident by picking up “Out of the Mouth of the Dragon” from a second hand book stall in Spitalfields Market. The latter only came about because of the RedPixie connection, thus demonstrating the perfect way my professional life fits into my lifestyle.

So I’ve gone from Robert Burns to Mark Geston in the space of a few lines which I hope demonstrates there is a life for this blog outside of virtualisation.

No hard-core techy progress to report. I have installed a second SATA hard drive in my machine. Well, almost installed. I only need a SATA cable. Ha. Thought I had one but couldn’t find it. Went to buy another and got the wrong part. Sigh.

Can’t get a locally attached scsi drive to work on my Silverstone so I’ll just have to get down to Maplin tomorrow and buy a small SATA disk that I can use for a Datastore. I guess there’s still the QNAP option, I never did get around to getting NFS to work after I got TimeMachine going.

Just a note to myself to commemorate the fact that I successfully installed Centos from a USB stick what I wrote. On the down side I haven’t actually booted my machine with it as now I have to fiddle with grub, which is going to be for another day. Small steps.

Happily I found the reference to the datastore which I clobbered and have removed it from the file on the USB stick. Given the error messages in my earlier post, it is clear that something remembered that datastore. A manual browse didn’t turn anything up (but was interesting for other reasons) so I tried the following command to search all files for a portion of the datastore ID:

Removing the file makes esxi forget about that datastore and boot in normal time.

I am even more convinced that it is possible to make a USB datastore now that I can see that the USB stick which boots vSphere has vmfs portions on it. Consequently I am going to persevere on that for a bit.